You're first introduced to crafting once you hit the main city, Hakain's Crossing. You'll get side quests that will walk you through the basics—Blueton on Artisan's Square in Hakain's Crossing will have the first quest.

There are six crafting categories:

How to craft[edit | edit source] 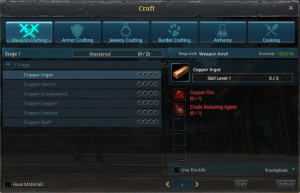 The crafting window showing the crafting categories and basic recipes for Weapon Crafting.

Press [N] to open your crafting window. There you will find the recipes you have learned. If you are near a crafting table and you have the needed materials, you can use this window to craft the items you want to craft.

You find materials out in the field (for example, copper ore for armor) and take them to a workshop. (Secondary) crafting materials are sold by crafting profession merchants.

Crafting recipes can be acquired through dungeons and raid bosses as well, including familiar taming item recipes.

Your crafting proficiency increases by crafting items. To level up your crafting, talk to a crafter to raise your level. You can find crafters in most big towns. It requires at least two master crafts to rank up a level with a certain crafting profession.

When crafting, there is a chance you will get extra or higher quality items. This is called 'Triumphant Crafting.' The higher your proficiency, the higher the chance you will craft triumphantly. You can also use double the required materials to increase this chance.

There are currently 4 crafting stages per profession, and each stage is currently having at least 10 different recipes, after learning most of them (except Cooking).