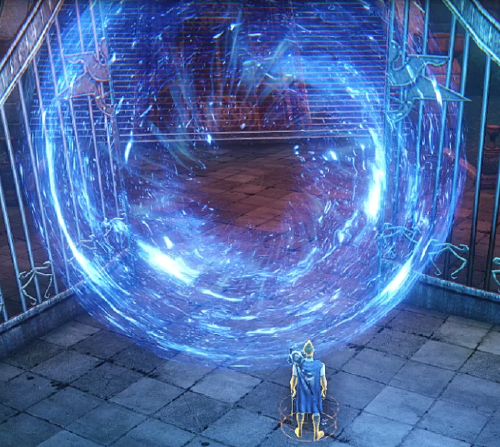 Dungeons may be entered by approaching the portal and selecting a mode and difficulty. The four modes that are available for each dungeon are Story, Elite, Heroic, and Legendary. Story is a mode with no difficulty settings, and is required in order to progress the main questline. Dungeons require a certain minimum level; and characters underneath that level will not be allowed to enter until meeting the level requirements. 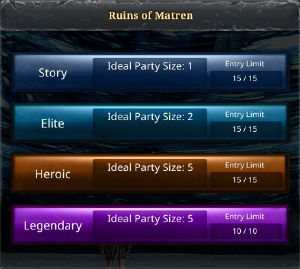 Story mode is the easiest mode and may be completed by one person, though up to two players may enter Lavalight Cave and Carleon Manor in Story Mode. Each Dungeon has its own player limit. Once a dungeon has been completed in story mode, Elite and Heroic modes become available.

Elite is the first challenging mode. Elite I (Very Easy) and II (Easy) may be completed by one person; however, the recommended party size for Elite dungeons is usually 2 - 3 players. When going through as a party, it is generally understood that "need before greed" is the best looting policy.

Heroic is the 3rd level of difficulty. Recommended party size for Heroic Dungeons is 3 - 5. Soloing is almost impossible without a heavy stock of potions and enough Elluns for revivals, even with appropriate equipment and up to 5 levels above the requirement, depending on the class. The primary purpose of completing Dungeons in the first place is to "farm" powerful heroic equipment, either to use personally or to extract the equipment to get high level Tempering stones.

Legendary mode is currently the most difficult of the 4 modes and only available for adventurers level 40 and up. Its rewards are legendary items such as taming marks, legendary gear, seal scrolls, and seal stones as well as jewelry. While it is the most difficult mode, it also requires a special emblem to enter the dungeon. The legendary emblems for the dungeons in Hakanas Highlands can be obtained from a daily quest located in the Victory Plaza of Hakain's Crossing. 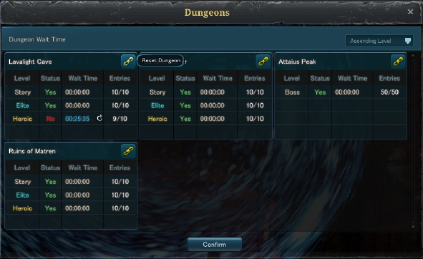 If you wish to re-enter a dungeon within a short time after clearing or leaving it, you will need to go to the dungeon reset page (default key of ]), and select the reset dungeon link at the top right corner. If you try to enter the dungeon portal without resetting, you will be taken back to the old dungeon instance.

Each Dungeon has its own special materials, mounts, and unique drops. Repeatable quests near the entrance to every Dungeon reward familiar orbs used in crafting the marks needed to tame the unique mounts inside. The other crafting materials needed for the mounts can also be found inside. For instance, flame items to make the Blazing Heart from Lavalight Cave are used to tame the Magma Hound, and Pedigree Marks for Black Wind are drops in Carleon Manor. Completing the Rabbini quests for a Heroic dungeon mode rewards coins that may be used to purchase heroic dungeon gear.

New dungeons include Cavern of the Veil and The Frost Keep from Parna's Coast, The Breach from Tritael Rift, Fortress of Sorrows, Lair of Ma'art, Ellora's Spire, and Temple of Sands from the Cloying Waste lands, as well as the Forgotten Shrine from Ellora's Sanctuary. Lavalight Cave, Carleon Manor, Ruins of Matren, Cavern of the Veil, The Frost Keep and The Breach have legendary modes to enjoy were you can obtain legendary items such as mounts, gear, and seal stones.