You can now enhance your familiars even further with stat boosts using the newly introduced Familiar Tempering system.

The maximum rank of familiar tempering at this moment is +5. The first step to start tempering your familiars (both mounts and pets included) is to have a familiar on max level. You won´t be able to temper them until they reach their maximum level. To check if your familiar is max level, just open up your familiar storage. On the left you will have his level, while in the right corner there is the tempering tool. 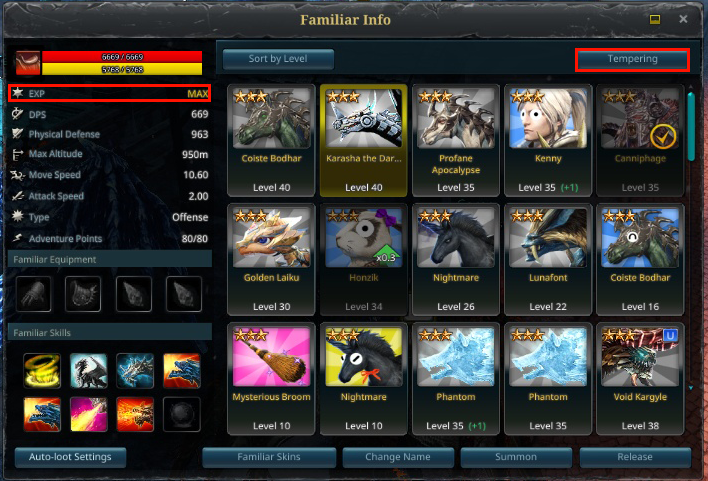 After you have your chosen familiar on max level, you will need sealed familiars and Familiar Enhancers to begin. You can buy these Enhancers from every Barder Craft Merchant in the game. Keep in mind that after they added new items, the Enhancers are on the second page. Dont get fooled by those who are trying to sell them for more with Market Broker, you can get as many as you need for 1g each. Also, you can drop them from Elite monsters in Cloying Wastes, but it is easier to buy them. 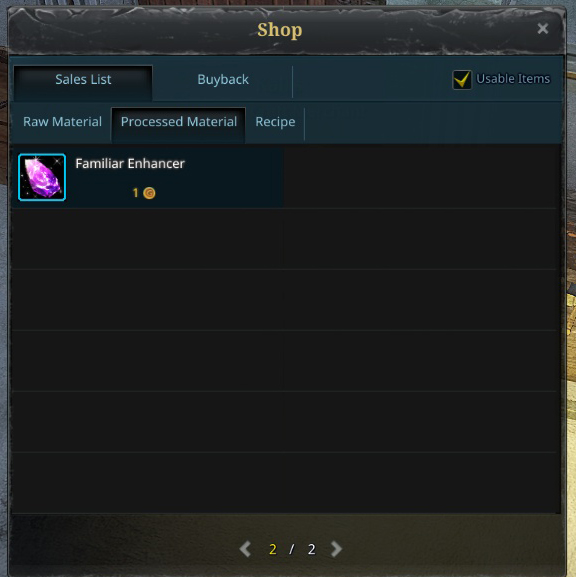 The amount of Enhancers you will need depends on what grade /Common, Elite, Heroic, Legendary/ is your familiar, and what tempering level he already has. I did not try the Common familiars, but let me be honest, you won´t either as it costs money and they are just not worth it.

For Elite familiars, the first rank of tempering requires 5 Enhancers, the second 10 and so on.

For Heroics, the first rank requires 10, the second 20 and so on. That means, in total you will need 150 Enhancers to get a Heroic on +5

Keep in mind that there is a chance to fail tempering, so you will probably need even more. The good thing is that even if you fail, the rank will not go down. It works the same way as tempering your armor to +10.

As I mentioned before, you will also need sealed familiars. You can use any kind of seal, let it be Common, Elite, Heroic or Legendary. If you want to temper Heroic familiars, you will be fine with Elite seals at the beginning, but for +3 - +5 you will probably need Heroic seals anyway. For Legendary familiars you will require Heroic seals, for +5 even a Legendary seal. The easiest and cheapest way to get Elite seals is to go to Hakanas Highlands and tame either Ruby / Blue Bloodwyrms which do not require marks, or go to Broken Caldera, do the repeatable quest for the Caldera Firebeaks and tame those. They will save your Taming Points and money too. To get Heroic seals cheap, you can either craft an armor set for Nightmare/ Profane Apocalypse in Exarahn Badlands, or simply run one of the Lairs. There are several familiars you wont need in your end- game which you can use for tempering.

This is just a quick guide in case someone never sealed a familiar before. While for Common familiars you can get Seal Stones from various Shopper or Groceries, for Elite familiars you will have to run some dungeons or hunt down a few elite monsters. Although, I do recommend you to run the dungeons as you can get more stuff from there. Basically, any Heroic dungeon can drop these seal stones, but if you are not well geared yet, I do recommend you to go Lavaligh Heroic V where you can obtain it pretty easily. It is getting harder if you are looking for a Heroic Seal Stone, as they are pretty rare in lower dungeons. But if you are running The Frost Keep on Heroic V, almost always drops one. Or you can go on world bosses. In the Legendary dungeons both of these are common drops, so if you are a bit better geared, grab a friend or find a party and run these. To get a Legendary seal stone for Legendary Familiars, you will either need to run Legendary Dungeons where they are a bit rare drops, go on Attaius or Tranua where they drop sometimes, or just try your luck in Ellora´s Spire where they drop pretty often. Now, how to actually seal a familiar when you get the seal stone? Simple as it is, just right click on the seal stone then select the familiar you want to seal. Keep in mind that with Elite Seal Stones you can only seal up Common or Elite familiars, with Heroic you can seal up both these + Heroics and with Legendary Seal Stones you can seal up any grade. 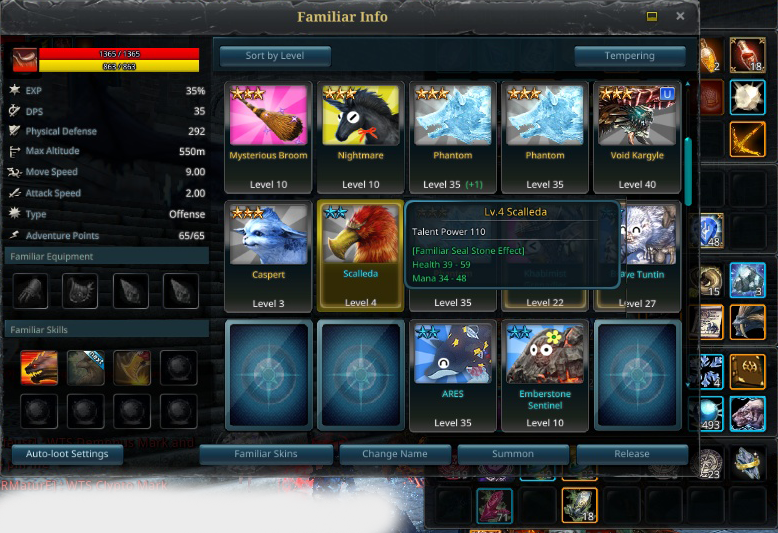 When you have all the ingredients, you can start your tempering. There are 3 grades of chances on tempering: Low, Medium and High. You are always looking to get your chances on High. The higher level the familiar has, the more sealed familiars you will need to get the High chance. It is also going up as you get a higher tempering rank on your familiar. On the screen below, I had to use 3 Elites to make my chances High on Karasha without any tempering rank on her.

If you are tempering an Elite familiar, common seals will be enough.

For Heroics you will need Elite seals, in later stages Heroic seals.

For Legendary Familiars you will need Heroic seals, in later stages Legendary seals.

WHAT YOU GET FOR TEMPERING A FAMILIAR

And now, the big thing, why you should temper your pets or mounts. As the image with tempering Karasha shows, your mount gets some nice bonuses such as bonus HP, Energy, Defense, Movement Speed, and for flying mounts even Altitude. Basically, tempering makes your familiars stronger and better to use in combat.

As an example: There are several new bosses, dungeons where your pets/ mounts are getting killed because of their low health, such as Jumawu, Tranua, new legendary dungeons or Ellora´s Spire. With tempering you can avoid the death of your familiar because most of the times they will have more health on +5 than most of the tanks, and thats impressive, isnt it? Another good example is with flying mounts which cant get high enough but you still want to use them for one reason or another. Every tempering level gives +40m for Elite familiars, +50m for Heroic familiars and +60m for Legendary familiars. This will come most handy on maps such as Tritael Rift or in the Breach. Just to compare what stats are different on tempered mounts, here is a screen where you can clearly see what you get.

The last reason why you should temper your familiars is mainly for those who are looking for the best gear in the game. While tempering a familiar gives him nice buffs with every level, tempering a Heroic to +5 also gives some bonus stats when you are going to seal it up. For example, if you have a sealed Void Kargyle, it gives you 101-136 Magic attack + 20-24 All stats bonus. Now, if you temper him to +5, you will get all these bonuses +4-5 All stat bonus. Heroic mounts from Windhome Canyon and Ellora Sanctuary have 6-7 All stat bonus. Legendary mounts have 7-8 All stat bonus. A small screenshot to show you the difference in a +4 and a +5 Seal Stone: 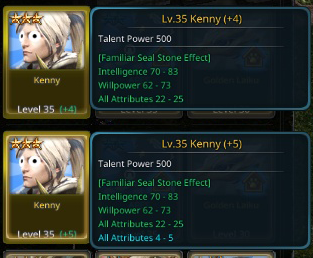 Hope this is a helpful guide, I wish you good luck with Tempering.