Garme is found in the Cemetery, within Hakanas Highlands. He is a ghastly monster that was created by members of the Khabim Brotherhood with their dark magic. The player needs to possess Daveen's Perfume in order to tame Garme. 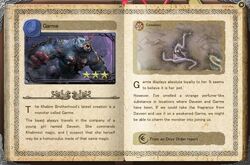 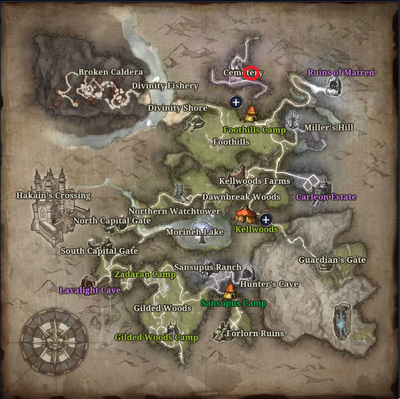 Garme's location on the map

“The Khabim Brotherhood's latest creation is a monster called Garme. The beast always travels in the company of a young girl named Daveen. She commands Khabimist magic, and I suspect that she herself may be a homunculus made of that same magic. Garme displays absolute loyalty to her. It seems to believe it is her 'pet.' However, I've smelled a strange perfume-like substance in locations where Daveen and Garme have been. If we could take the fragrance from Daveen and use it on a weakened Garme, we might be able to charm the monster into joining us.”

― From an Onyx Order report

Garme is accompanied by a young girl named Daveen and it follows and protects her fiercely. If you engage her, you will be attacked by both simultaneously, and they hit hard. You'll need to have a well rounded team to be able to handle them both at the same time. Daveen is easier to eliminate as she has significantly less HP than Garme, and should be as soon as possible. Her ability Cry will enrage herself or Garme and cause one of them to move 50% faster and increase attack speed by 20% for 30 seconds.

In order to tame Garme, the player must obtain Daveen's Perfume. Daveen is very easily eliminated as she doesn't have very much HP, Garme on the other hand, has a lot of HP, and you cannot simply jump onto him like you can some Commons and Elites. Garme must be beaten down to a very low point on his HP bar, roughly 20%. Only then will he become available to tame, and as a Heroic this can be quite difficult and could still very easily result in you having to obtain another perfume should you fail. 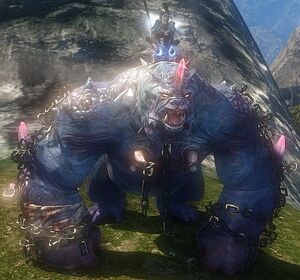 And when you use the sealing stone to get talent points you get: Talent Power: 310