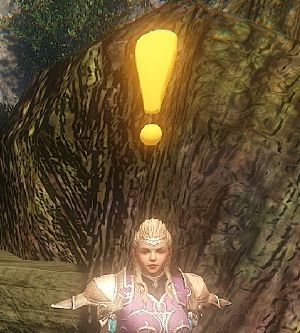 Quests are objectives given to the player to complete for a reward, usually in the form of experience and money. Quests are given throughout the player's progression through the world of Riders of Icarus, and even guide the player to areas that match their level range; as a result of both this and the large amount of experience they provide, completing quests is expedient in leveling up a character as fast as possible. Quests can be viewed using the Quest Tracker to the right of the player, or by accessing the Quest menu (default shortcut: J). Click this link for Quest List that are in game 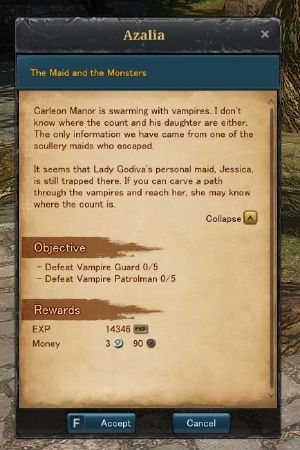 When the player talks to an NPC offering a quest, the dialogue box will display the quest(s) being offered. Clicking on the quest (or pressing F to open the topmost one) will display a brief story on what the quest is about, the objective to complete, and the reward for completing the quest. From there, either click Accept or press F to accept the quest. Once the quest has been accepted, a gray question mark will appear over the NPC's head, indicating that the quest is currently in progress; moreover, the quest will be added to the Quest Tracker for easy viewing.

After accepting a quest, all the player needs to do is complete the objective(s) given. There are many possible objectives, but the most common ones are killing enemies, and collecting items that are either dropped by enemies or gathered from the environment. Quests also commonly involve speaking to another NPC, typically to bring the player to the next area, escorting an NPC from one place to another, or obtaining a specific familiar. Quests can also have multiple objectives, such as killing multiple types of enemies. Regardless of the objectives, once they have been completed, the player may then return to the NPC who gave the quest for their reward (although sometimes they will have to go to a different NPC).

Almost every quest rewards experience points and money, usually a large amount. Some quests also offer one or more items for completion, in which case the player will require enough inventory spaces in order to accept the items being offered. Sometimes, the player will be forced to choose between multiple items offered; the one the player clicks will be the one given, while the other item will be lost. Other possible rewards include titles and familiars.