Taslan the Devourer is a tamable Elite enemy found within the Northern Ruins instance of Brakarr Forest. She is the broodmother of the spiders infesting the Northern Ruins, tamed by the Khabimists with their dark magic. The player needs to possess the Shadowbind Tome in order to tame Taslan. 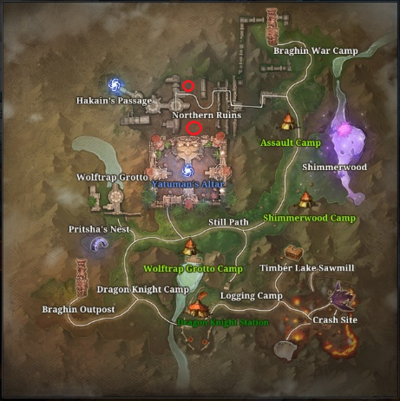 Taslan's location on the map

Taslan is surrounded by small spiderlings, so taking these out before attacking Taslan herself will make the fight much easier. Otherwise, Taslan herself is a fairly simple boss. Be careful of the surrounding spiderwebs, though, since they slow the player down. 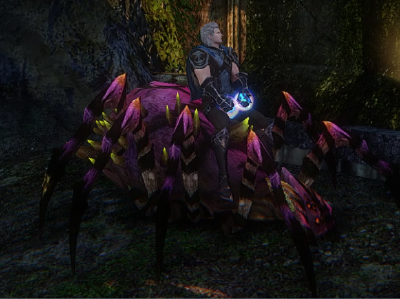 In order to tame Taslan, the player must obtain the Shadowbind Tome from the Khabimists in the Northern Ruins instance, where Taslan also happens to reside. The tome is an uncommon drop, so players may not be able to obtain the tome before killing all the Khabimists. If this happens, simply leave the instance from where the player entered, which will cause the quest to fail, and then forfeit and reaccept the quest. This will respawn all the Khabimists in the instance, and can be repeated as many times as necessary until the player finally obtains the Shadowbind Tome. Alternatively, the tome also drops from the Khabimist Mages in Forlorn Ruins of Hakanas Highlands, and from a Braghin Shaman, there is also the Death Mages Khabimist in the cemetery in Hakanas Highlands where the tome can be dropped.

Once the tome has been obtained, Taslan may be tamed at any time. She's a fairly easy mount to tame, but it would still be wise to bring her HP down a little to make taming Taslan even easier, so as to avoid having to obtain another Shadowbind Tome.

And when you use the sealing stone to get talent points you get: Talent Power: 35